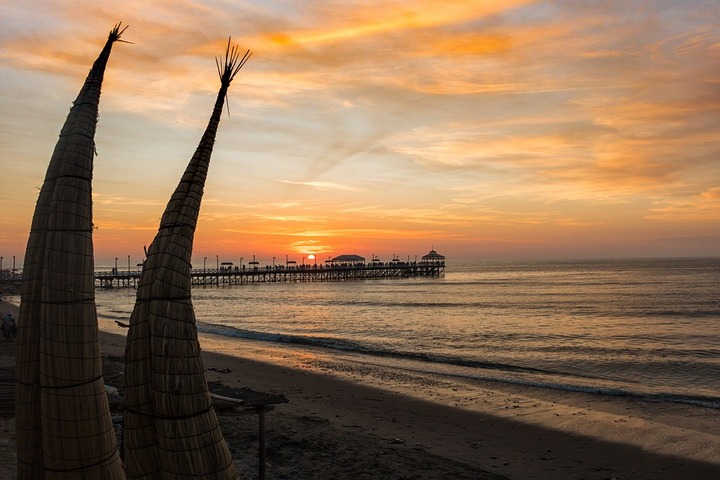 Home Destinations Learn more about Trujillo on your next visit to Peru: The City of Eternal Springtime
DestinationsFamily TravelPlaces to visit

Learn more about Trujillo on your next visit to Peru: The City of Eternal Springtime

Trujillo is the capital of the Department of La Libertad, “Capital of the Eternal Spring” and is the third most important city in Peru, due to its great economic and cultural importance; it has the most productive valleys in the country, which has allowed it to develop economically.

It is the third most populated city in the country and the cradle of traditions, beautiful landscapes and important vestiges of pre-Columbian civilizations. This city extends over 1769 km² of surface and, in the 2017 census, had 970 thousand inhabitants, with an annual growth rate of 1.8%.

The agricultural industry is the most important activity in this part of the country, standing out in the production of sugar cane, asparagus, and the shoe factory. It is the first producer of sugarcane and second in rice production in the country.

“Trujillo de Nueva Castilla”, as it was called at its foundation in 1535, has five administrative districts. Also, in 1988 it was declared “Capital of the Marinera” (traditional Peruvian dance). In 1986, one of its archaeological zones, the city of Chan Chan Adobe, was declared a World Heritage Site.

Trujillo is a wonderful city we sure you don’t wanna miss on your next trip to Peru , a new destination and a whole adventure is waiting for you always .

That’s why you may need to use one of our mobile phone plans for tourists to have a tourist SIM card.In order to understand and discover new amazing places like this here in PeruSIM.

Now let’s find out all the important facts about  Trujillo Origins, and everything you might see on your next adventure in Peru:

History of the ‘Cradle of Liberty and Justice’.

Trujillo impresses with its brilliant blue sky, its colonial architectural constructions and its ancestral history. It was inhabited by civilizations more than 15,000 years ago, such as the Cupisnique, Mochica and Chimú cultures (1000-1200 A.D.), whose capital is the city of Chan Chan.

Numerous vestiges of these cultures can be seen in various huacas (ceremonial spaces), archaeological complexes, museums and walled sectors, evidence that continues to appear despite the years. On the other hand, Trujillo was also an important city during colonial times.

The Spaniards founded Trujillo in 1535 and its name is due to Francisco Pizarro’s hometown (Trujillo de Extremadura in Spain).

It was an important center of Spanish power, thanks to its proximity to the port of Huanchaco and the preference of several aristocratic families to live there.

In this city was established a Spanish corregimiento, being the seat of a bishopric that ruled over several provinces. It was also besieged on many occasions by pirates and enemies of the Crown.

Later, during the independence struggle, Trujillo was an important focus for libertarian ideas.

Many liberal leaders studied in its schools. In addition, it was the first Peruvian city to completely free itself from the Spanish yoke, completing the process of independence from Spain, being the first city to raise the Peruvian flag. That is why it is the Cradle of Liberty.

After this, Trujillo has gone through a demographic growth benefited by its economic growth. While in Lima there were wars of warlords, in Trujillo the economy was strengthened by agricultural development (mainly by the sugar industry), although it was later affected by the war against Chile.

In 2010, the city, which was also the seat of government and provisional capital of the republic, was chosen by the Inter-American Development Bank (IDB) to develop the “Sustainable City” pilot project, focused on fiscal, financial and environmental sustainability and improved quality of life.

How to get to Trujillo

By land: There are interprovincial transportation services that depart from Lima to this city, through the Panamerican Highway North, the trip takes about 8 hours approximately.

By Air: There are daily flights from Lima to Trujillo, with an approximate duration of 45 minutes.

The airport “Carlos Martinez de Pinillos” is located in the district of Huanchaco, 10.5 km north of Trujillo.

It is known as the “City of Eternal Spring” thanks to its privileged climate. Besides being the cradle of the elegant marinera, it has the most favorite beaches for surfers.

As a good spring city, Trujillo’s climate is warm, dry and temperate, with average temperatures of 19°C almost all year round, with hot summers (between 23°C and 33°C) from November to April and temperatures ranging between 13°C and 19°C during the winter.

The ideal month to visit is September because temperatures remain balanced and are perfect to enjoy the International Spring Festival.

What to do in Trujillo?

Also called the  ‘Capital of Culture’ has multiple attractions to enjoy its landscapes, know its history and be part of its traditions.

Visit the historic center of Trujillo:

This space, which occupies more than 70 blocks, is composed of civil and religious monuments that tell part of the history of the city.

The monumental zone begins on España Avenue and there you can find the Plaza Mayor or Plaza de Armas, the Plazuela El Recreo, the Municipal Palace, the Urquiaga House or Casa Calonge, Casa de la Emancipación and religious temples such as the Trujillo Cathedral (built between 1647 and 1666), El Carmen Church and Monastery, San Agustín Church, among many others.

You can familiarize yourself with the constructions, traditions and rites of the Chimú and Mochica cultures. For this there is a Moche Route that includes the Huacas del Sol and La Luna, located 4 kilometers from the historic center. There is also the Chan Chan Archaeological Complex, representative of the Chimú, as well as the Huaca la Esmeralda, the Archaeological Complex El Brujo and the Huaca Arcoiris or Dragon.

Within the Spring City there are about 10 museums that offer part of the history of the independence of Peru; a space dedicated to the fauna of the Peruvian coast, highlands and jungle, as well as places dedicated to the most distinguished Trujillanos.

Quite close to downtown you will find attractive beaches for their waves, fantastic weather and beautiful sunsets. Among them are: Huanchaco Beach (ideal for surfing); Las Delicias Beach; Salaverry (with fine sand and a port for luxury cruise ships).

Puerto Chicama (a little further away) and Puerto Morín (the perfect place for observing the local fauna). In addition, you will find wetlands, lagoons and views of the Moche River – not to be missed!

To talk about spring is to talk about different shades of green and the smells of flowers. For this reason, in Trujillo there is the Botanical Garden, considered the largest green lung of the city; the Alameda de Mansiche, a forest with very old trees and the Garden of the Senses, a place designed for blind people, seeking to generate unforgettable sensory experiences.

In Trujillo there are always cultural activities, from dance performances, concerts, theater, recitals and book fairs. Among the most outstanding dates are the Marinera Festival, the International Spring Festival, the Regional Peruvian Paso Horse Contest, Trujillo Independence Day and the Trujillo International Book Fair.

Trujillo is a tourist area, so its gastronomic offer is unquestionable. Although it mixes traditional European dishes with a millenary tradition based on fish, poultry, tubers and vegetables, in this place you can eat delicious food from the municipal market, with little budget, to a luxury restaurant.

Among the Trujillo seasoning, dishes such as ceviche, shambar, Trujillo-style beans, crab bursting, fried northern Trujillo, among many others, stand out.

Find more about Huacachina : The Peruvian oasis in the middle of the desert