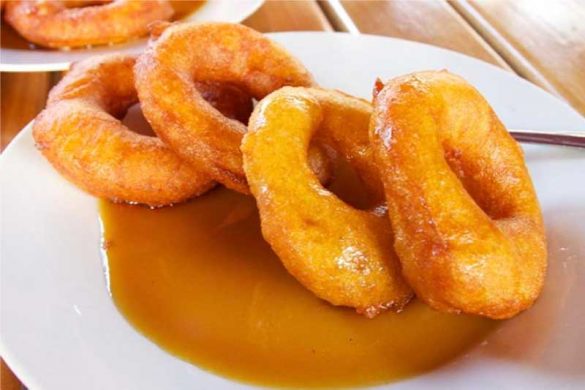 Home Solo Travel Learn more about the history of Picaron, a Peruvian dessert not to be missed
Solo Travel

Learn more about the history of Picaron, a Peruvian dessert not to be missed

Similar in their globular shape to doughnuts, and in their texture to fritters, Picarones are one of the favorite desserts of all Peruvians, to the point that they are considered one of the most traditional and exquisite of Peruvian pastries. Bathed in chancaca honey, these delicacies have been present in popular culture for almost two centuries.

The history of this Creole dessert dates back to the time of the Viceroyalty. Before the arrival of the Spaniards, in our territory they used to prepare stews based on sweet potato and pumpkin, and after the conquest, ingredients such as wheat flour were added. This mixture, very similar to the Iberian fritters, is what we know today as picarones.

Since the conquistadors, who already knew the rich fritters, added wheat flour and sugar to the mixture. But, in addition, being a more compact dough, the picarones took the form of breads, which were garnished with chancaca.

Like any custom, the recipe was passed from generation to generation and it was in this way that the Afro-descendant cooks managed to popularize this sweet among the population.

These women would go through the streets hawking their merchandise, especially during religious processions, the best known being the feast of the Señor de Los Milagros, where it became impossible not to find the famous picarones.

While Traveling and discovering new extraordinary desserts in Peru you may need to use one of our mobile phone plans for tourists to have a tourist SIM card. In order to understand and find new recipes to watch ,here in PeruSIM. Now let’s find out all about picarones history and preparation:

The story goes that Picarón originated in pre-Hispanic times, when the natives prepared a similar recipe based on sweet potato and pumpkin, ingredients that were part of the Inca diet.

Later, with the arrival of the Spaniards, new ingredients were added, such as wheat flour and sugar, and the Picarón acquired its classic hole in the center.

So great was the success and popularization of this dessert among the people of Lima that, over time, the recipe was passed from generation to generation, especially among the cooks of the Afro-descendant families.

Many of these women were town criers who advertised their products with verses or melodic songs. Picarones were served as hot bread in religious processions such as that of the Señor de los Milagros.

“Here are the hot picarones! They call me picaronera because I sell picarones and they don’t call me ratera(thief)  when I steal hearts? How tasty! How tasty! Hot picarones!…. Round and toasted, well soaked in their honey, they are provoking the rascals to old people and kids”, says the lyrics of “La picaronera”, a composition of the Peruvian artist Rosa Mercedes Ayarza, which shows a sample of this sweet tradition.

Currently, the consumption of Picarones is so demanded by Peruvians and foreigners that it is possible to find in almost any corner of the capital a cart where to taste them.

Picarones, one of the most traditional sweets in Peruvian gastronomy, has its origins in our indigenous ancestors. Since ancient times, they used sweet potato and pumpkin to make this recipe, which in its beginnings had a fritter shape, different from the donut by which it is currently known.

Preparing picarones may not be as easy as we would like it to be. It takes a long time to develop the technique of kneading and assembling this doughnut, which bears no resemblance to the famous American doughnut.

Pay attention to the ingredients you need to make picarones:

Peel the sweet potatoes and pumpkin and chop them into pieces. Then, in a pot with water, boil these ingredients together with the aniseed and cinnamon. Let cool, remove the cinnamon and blend.

Reserve a part of the preparation and pour the rest in a bowl, add the wheat flour and proceed to integrate the elements with the help of your hands.

Add the yeast to the reserved portion of the mixture and wait for bubbles to come out of the mixture. Now add this combination to the rest and continue mixing until you reach the desired consistency. When the dough is ready, let it rest for 20 minutes and you can proceed to shape the picarones, which you should fry in very hot oil.

The secret of the dough is in the consistency. You must make sure that the mixture is elastic.

Another useful tip is not to overcook the dough. 15 seconds on each side is enough.

To prepare the Picarones honey, cut the chancaca into very small pieces and pour everything into a saucepan.

Add a cup of water and cook until completely dissolved. Then, with the help of a sifter, strain the preparation and pour it into a pot. It is important to strain the diluted chancaca to completely remove any twigs.

Then add 250 g of sugar and one cup of orange juice. You can add more flavor to the honey by adding quince, apple or pineapple. Complement with 2 fig leaves, 2 cinnamon sticks and 5 cloves. Cook the mixture over medium heat until you get a honey texture.

Do you know where the best picarones are sold? Here we bring you some references for you to taste the best creole delicacy.

It is located at Jirón Zepita 214, near the Puente de Los Suspiros, in Barranco. This place offers you a pleasant space to share with your friends in the company of the best picarones of the district.

If you are in Miraflores, you cannot miss Jhosimar Valverde’s cart, a meeting point that has been offering delicious picarones for more than 25 years to diners and tourists who stroll through Parque Kennedy and its surroundings.

This place is ideal to enjoy crunchy picarones and it is located in San Miguel, specifically at 155 Mariscal Antonio José de Sucre Ave.

Know about the Best Peruvian films