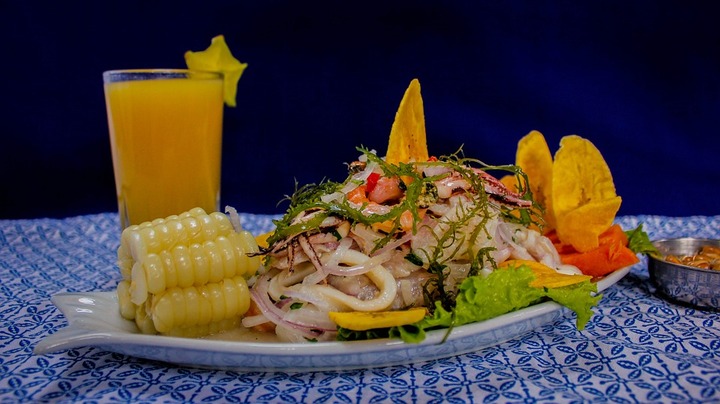 Ceviche is undoubtedly Peru’s flagship dish. It is the food that best represents us, and that stands out in the different gastronomic fairs that take place around the world, where Peruvian food is present.

It is a dish that is prepared with raw fish or seafood cut into pieces, and that has lemon juice, chopped onion, chili bell pepper and salt. It is accompanied with sweet potato, corn, cancha serrana or chifles (in northern Peru).

In 2004, ceviche was declared by the National Institute of Culture (INC) as Cultural Heritage of the Nation, as it is considered one of the main dishes of Peru. Also in 2008, June 28th of each year was declared “Ceviche Day” throughout Peru.

While Traveling and discovering new extraordinary flavors you may need to use one of our mobile phone plans for tourists to have a tourist SIM card. In order to understand and find the best ceviche corner in every place you might visit , here in PeruSIM.

Let’s find out more about this world-famous dish known for its exquisite taste, even for those who are not so fond of fish, which always makes Peruvian gastronomy proud:

It is believed that the inhabitants of the Mochica culture, in northern Peru, more than two thousand years ago, already ate raw fish that was macerated with the juice of a fruit, possibly the tumbo.

In general, it is known that in the coasts of Tumbes, Piura, Trujillo and Lima, the ancient natives had the custom of eating raw fish.

There are also some chronicles of the Spanish conquistadors that describe the native Indians of the coast, who ate raw fish with salt and chili.

The Mexican chronicler Pedro Gutiérrez de Santa Clara wrote in his “Civil Wars of Peru” (1544-1548), that the Indians of Peru, everything they fished in the river or in the sea were eaten raw.

With the arrival of the Spaniards, new ingredients such as onion, sour orange and lemon were introduced and used in the preparation of raw fish. Over time the dish became common under the name of ceviche, cebiche or seviche.

The first known recipe for “ceviche” is from 1860 and belongs to Manuel Atanasio Fuentes, who mentions it among the spicy dishes in “La Guía de Lima”: it consists of small pieces of fish or shrimp that are tossed in sour orange juice, with lots of chili and salt; they are kept like this for a few hours, until the fish is impregnated with chili, and almost cooked by the caustic action of this and the sour orange.

The song “La Chicha” was very popular in 1820, written by José de la Torre Ugarte and José Bernardo Alcedo (later they would write the national anthem), it vindicated the national food and drinks, and was sung during the first celebration of the independence (the national anthem did not exist yet). This song was the first time the word cebiche was mentioned.

Where does the name come from?

Ceviche is also known as cebiche, sebiche or seviche. Some people believe that the word cebiche originates from the word “cebo” in its etymological meaning of food or delicacy, as it was used until the 16th century.

An explanation of this possibility was published by García More in 1952 in the newspaper El Comercio, and also the linguist Martha Hildebrant argued in 1962, that it is possible that the name of the dish derives from the word cebo, for the same reasons.

During the 19th century it was common that in recipes the dish was written as seviche or sebiche. There are some people who maintain that the word cebiche comes from the word escabeche of Arabic origin.

Sivinche is the name given in the city of Arequipa to a type of shrimp ceviche. The recipe of sivinche or shrimp seviche is found in the book “La Mesa Peruana” of 1896. In this recipe it is very particular the use of vinegar instead of lemon, so it can be said that it has a pickled style.

The historian, lawyer and geographer Javier Pulgar Vidal (1911-2003) had the theory that the word ceviche came from the Quechua word siwichi which means fresh or tender fish.

There is a great variety of ceviches depending on the type of fish, seafood and ingredients used in its preparation, but the most common are the following:

There are some dishes that have been derived from ceviche such as:

Next, let’s review some cebiche preparations in the regions of the country.

Shrimp ceviche is one of the typical dishes of this region, whose gastronomy is considered one of the most important in Peru thanks to its variety and flavors that conquer palates.

In this variant, the star ingredient is river shrimp, crustaceans that replace fish and give the dish a deliciously unique flavor.  Other ingredients used to prepare cebiche are limpets (marine mollusks), criadillas (boiled bull testicles), and a diversity of seafood and fish obtained from the rich Peruvian sea.

The ceviche prepared in this and other regions of the Peruvian Amazon (San Martin, Ucayali, Madre de Dios, Amazonas, Huanuco, among others), replaces fish of marine origin with those caught in the Amazonian rivers (paiche, dorado, catfish, doncella, among many others).

The meat of these hydrobiological species is marinated with jungle citrus fruits such as camu camu, and combined with fried plantain, thin slices of chonta (the stem of a type of edible Amazonian palm tree), aji charapita, pijuayo, sachatomate, sachaculantro and other ingredients that the cooks wish to innovate. The result is a succulent cebiche with Amazonian identity.

In the land of the eternal sun, the ceviche that stands out is called “Chinguirito”, prepared with shredded dried meat, a kind of ray from the bay of Sechura, which is marinated in Tambogrande lemon juice, aji limo and red onion.

The result is a succulent regional stew that is accompanied with chifles (fried plantain in thin slices) and zarandaja, a type of bean grown in northern Peru.

Black shell ceviche is the star dish of Tumbes cuisine. This mollusk that reproduces in the mangroves is prepared and marinated with Chulucanas lime, seasoned with red onion, garlic and rocoto, one of Peru’s emblematic chili peppers.

The juice obtained from the mixture of the ingredients and mixed with the black shells turns this stew into a delicacy that popular tradition attributes aphrodisiac properties to it.

In Peru this delicious dish is usually accompanied by sweet potato and corn.

The recipe to prepare this exquisite dish is as follows:

Preparation of the Peruvian Ceviche

1- Cook the corn in slices.

2- Cook the sweet potatoes, peel them and cut them into 2 cm slices.

3- Wash the fish with water and salt.

4- Cut it into small squares and salt it.

Put the fish in a bowl and season with crushed garlic and salt. Add the chopped aji limo bell pepper and the freshly squeezed lemon, pepper and chopped coriander. Let it rest for 10 minutes.

Place onion on top of the fish.Finally, we know that you have to keep communication with your relatives and friends, that you need to be able to orient yourself in new cities, that you might need help with translation and that you might need to search for restaurants or hotels. That’s why with PeruSIM you can buy a SIM card including the data plan of your need without having to worry about high roaming costs.