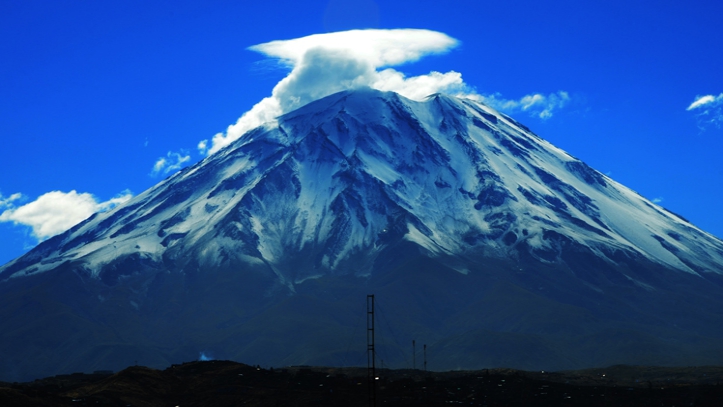 Approximately 400 volcanoes have been identified in Peru and are located in the Andean Volcanic Zone, which extends into northern Chile. Although most of these volcanoes are inactive, there is a group located in the south of the country that is active.

This activity has been manifested historically through eruptive processes, and currently with fumarolic manifestations and/or seismic movements. Within the group of active volcanoes, we find the well-known Misti volcano, as well as Ubinas, Huaynaputina, Ticsani, Sabancaya, Tutupaca and Yucamani.

While Traveling and discovering more amazing facts of Peru you may need to use one of our mobile phone plans for tourists to have a tourist SIM card. In order to understand and find more news before you visit Peru , here in PeruSIM.

Now let’s find out more about this volcanic zones in Peru:

It is the symbol of the city of Arequipa. It is located at the foot of the Chili Valley, within the National Reserve of Salinas and Aguada Blanca, at an altitude of 2,400 meters above sea level. It is approximately 800 thousand years old.

It is called Misti because of its meaning in Quechua: ‘man of white race’, as Arequipa is known as the ‘White City’ because of its constructions made of white ashlar. Its last significant volcanic activity was in 1870, when it presented large fumaroles.

It is important to note that Misti, being an active volcano, is permanently monitored by the Southern Volcanological Observatory (OVS) of the Geophysical Institute of Peru (IGP).

It is located in the department of Moquegua and is considered the most active volcano in Peru, as it has had more than 25 eruptions in the last five years. On the southeast flank of the volcano we can see the Ubinas valley, whose main town is located 6 kilometers from the summit. Currently, its activity is decreasing, however, sporadic explosions, ash and gas emissions can be seen at times, which do not represent any danger to the local population.

Located 75 kilometres southeast of the city of Arequipa, in the province of General Sánchez Cerro, department of Moquegua, the Huaynaputina volcano has an extensive plain (at 4,500 m.a.s.l.) with three openings or craters adjacent to the edges of a deep valley. Its craters are 70 and 150 metres in diameter and depths of up to 100 metres.

A stratovolcano that has had large avalanches in the past. Located 60 kilometers from the city of Moquegua, it has two buildings: Ticsani Antiguo and Ticsani Moderno. The former is formed by lava flows and volcanic rocks. And, the Modern Ticsani building is made up of 3 groups of deposits: lavas, pyroclastic flows of blocks and ashes and tephras (volcanic rock fragments).

In this volcano, scattered deposits of falling ash blocks and pumice blocks, volcanic rocks expelled after explosive activities, can be observed. Likewise, ‘bread crust’ bombs can be observed, portions of lava that adopt rounded shapes that crack when they fall to the ground, with a brownish color.

This is the second most active volcano in Peru. Located 75 kilometers northwest of Arequipa, this crater has been presenting an eruptive process since 2016, which is characterized by constant explosions accompanied by gasses and ashes.

A stratovolcano located in the north of the department of Tacna, 28 kilometres northwest of the city of Candarave. The volcanic activity of Tutupaca has presented several stages of eruptions of different explosive indexes. At present, there are frequent emissions of whitish fumaroles. This volcanic complex also has 49 hot springs.

Volcanic complex formed by three polygenetic volcanic cones: the Yucamani chico, the Calientes, and the Yucamani. Located to the northeast of the department of Tacna and only 11 kilometers from Candarave, it has a scarce eruptive history.

At present, Yucamani presents volcanic hazards such as lava flows, volcanic rock falls, and lahars (sediment and water flows that move from the slopes of volcanoes).

It should be noted that in the Andean Volcanic Zone there are also other volcanoes considered potentially active, including Ampato, Coropuna, Valle de los Volcanes in Andahua, Sara Sara, and Chachani.

Of all these volcanoes mentioned, the Tutupaca volcano in Tacna is the most peculiar as it has the highest number of collapses and is the fourth most active volcano in Peru.

Work has identified at least three debris avalanche deposits on Tutupaca, making it the active volcano with the highest number of sectoral collapses in southern Peru.

Know more about the Peruvian Cultural value of the theater