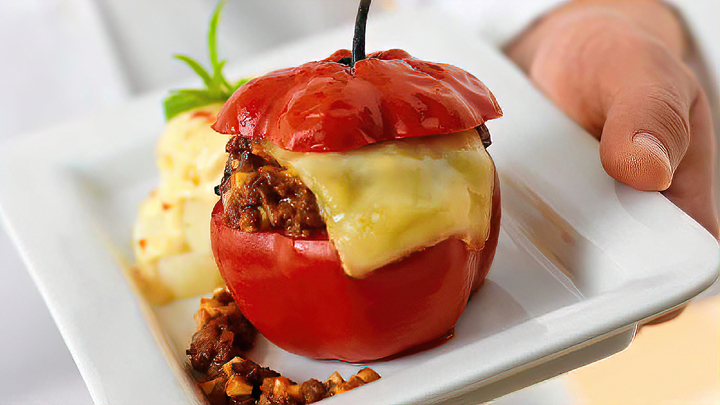 Peruvian food has been classified by many experts as one of the best in the world. Its richness derives from the fusion of many cultures and how ingredients and seasonings were blended in Peru to give birth to what we know today as Peruvian gastronomy.

Native dishes with local ingredients were mixed with aromas and flavors from Spain, as well as with ingredients and techniques from other cultures that arrived during the migratory waves of the 19th and 20th centuries. Japanese and Chinese in particular brought their cuisine and integrated it into Peruvian cuisine.

For its great variety, aroma, originality and food richness, it is the favorite of many tourists. When arriving in Peru, one of the main reasons for many travelers’ visits is to taste a Peruvian dish and try its diversity of products.

Peru has more than 3,000 varieties of potatoes, and many types of corn; its outlet to the Pacific Ocean offers an unparalleled variety of seafood, and grains such as quinoa and legumes such as tarwi enrich the Peruvian menu every day.

For many tourists it is a pleasure to feel the tradition and the mixture of cultures in this delicious gastronomy.

While Traveling and discovering new extraordinary gastronomies such as the peruvian one you may need to use one of our mobile phone plans for tourists to have a tourist SIM card. In order to understand and find the best pisco , here in PeruSIM.

Let’s find out more about this fundamental dishes you can’t miss on your visit to Peru:

It is the most consumed dish in Peru. The marinated meat is baked in the heat of the embers in a special oven that makes the chicken rotate on its own axis.

During the first half of the 20th century this dish, due to its cost, was considered only for the elite. Today the consumption of this chicken is widespread, and some chicken with potatoes is a common low-cost lunch.

Like we previously talked in our Article about everything you must know about Ceviche, this dish is considered a national cultural heritage. There is a great variety depending on the region and the type of fish.

Its preparation technique indicates that a fish, or raw seafood, is marinated in green lemon or sour orange, with onion, salt, aji limo and pepper.  The lemon acts as “cooking” and gives the meat a unique flavor that complements the other ingredients.

As there are so many types, every region, and every home, has a favorite recipe and a particular type of preparation. Ceviche can be served with pieces of potato, corn, or vegetables. It is also considered an aphrodisiac dish.

Casa Rellena with Chicken or Tuna

Causa is a very popular dish based on mashed yellow potato, green chili and corn, a Peruvian corn. The preparation admits several variants but generally, between layers of mashed potatoes, chicken or tuna meat is placed with other vegetables.

The history of this dish can already be found in times of the viceroyalty, and its name comes from the Quechua kausay, potato or food, since the potato is the main ingredient of the preparation. Another version says that “causa” comes from the speech of José de San Martín, in which “by the general will of the people and by the justice of their cause” Peru freed itself from the Spanish yoke.

This dish is born from the mixture of Peruvian and Chinese-Cantonese food, and is part of the chifa tradition, which is the Chinese culture in Peru. The dish consists of strips of beef marinated in soy and vinegar, sautéed at high temperature with onions and tomatoes.

It is a dish of regular consumption and it is easy to find it in restaurants and picanterias in any region of Peru.

It arises from the mixture of Spanish and Quechua ingredients, although it is said that it was brought to Peru by African slaves.

Originally the dish was made with leftover chicken and potato leftovers, but today chicken is used. Others trace its origin to the arrival of European cooks fleeing the French Revolution in which their aristocratic employers had perished.

Once in Peru, they were placed under the orders of wealthy families and created dishes that fused several types of cuisine. In the general recipe, the chicken is shredded and mixed with a simple preparation based on broth, green chili, milk and bread and served with yellow potatoes, olives and hard-boiled eggs.

From the Quechua anti kuchu (ancient meat cut) these preparations are low-cost cuts of meat that are grilled over charcoal.

The most famous preparation is made with beef heart: the meat is seasoned and skewered on a cane stick. This skewer is part of the family barbecue and is accompanied with corn, potato, chili and chicha morada or chicha de jora. In the street it is sometimes accompanied with a piece of bread that is skewered at the end of the stick.

They are usually eaten on holidays. However, you can find them in street food stalls in Lima, or anticucherías , in the district of Barranco by the Parque de los Suspiros or in some restaurants.

This is undoubtedly one of the most delicious and easy to prepare dishes of Peruvian cuisine. Typical of the city of Huancayo, in Junín, it consists of boiled yellow potatoes, covered in a thick and creamy sauce made with chili, milk and bread. The original dish is prepared with batán, but nowadays it has been replaced by the blender.

The rocoto is a typical Peruvian chili bell pepper, rich in capsaicin, an analgesic substance that also imparts spicy flavor to food. The rocoto is widely used in cooking, and it is also rich in vitamins.

This dish was created in Arequipa thanks to the Spanish influence that already had a similar dish with sweet peppers. In the absence of these, hot peppers were used, filling them with different types of meat and hard-boiled egg, with a layer of cheese on top. It is a typical dish that can be found in any restaurant in Arequipa.

This dish has been eaten since the time of the Incas and was then one of the most important foods. The guinea pig is a rodent that contains a lot of protein, has omega 3 and does not have much fat in its meat.

For many other non-Andean cuisines the consumption of this animal has been problematic because there is no tradition of eating rodents of this size. Because they reproduce quickly, guinea pigs have become an important source of protein for Peruvians, Ecuadorians and Bolivians, and for some areas of Colombia.

The preparation of this dish varies depending on the region, but in general it has chili, abundant garlic and boiled potatoes.

Olluquito with Charqui or Meat

This dish is one of the most representative of Peruvian cuisine because it has two ingredients that are exclusive to this country: olluco, a type of potato that grows in the Andes and whose leaves are also edible.

Charqui (ch’arki in Quechua), or dried llama or alpaca meat that is salted and dried in the sun in pieces (or sometimes whole parts of the animal including the bone).

Olluco is important in the Peruvian diet because of its high protein, calcium and carotene content, and charqui because of its low cost and nutritional value. Its production technique was imitated in other countries and reached the United States under the adapted name of jerky.

Discover the gastronomy of Cuzco, the imperial Inca city.